How to Create Pop Out Effect in Camtasia

Learn to create this Camtasia Pop Out Effect. You can use this spot zoom effect to focus on a specific part of your screen in your video.

I point to the first group.

See the caption as well.

I explain it and then it goes back.

And then I point to the next group.

Now let us go behind the scenes an understand how I achieved this effect.

Before that I am Ramgopal from ArteRamgopal.com.

I have removed the audio track because that is not relevant to this particular video.

On track one we have the screen capture on track two on certain portions we have copied track one and we have applied the zoom effect and then we added another track for us to write the callouts.

I'm going to remove all these elements and let me show you how to achieve this effect from scratch.

Now when we see the screen capture without the zoom, this is how it looks.

Can you see here we have the cursor going to one group?

We finish the explanation and then we go to the next group.

We finish the explanation and once it is done we go to the third group.

And then we show the explanation.

Naturally, since the screen is so big, it is difficult for the viewers to get a close up look at each.

The groups now let us make it easy for them by zooming into the specific groups. 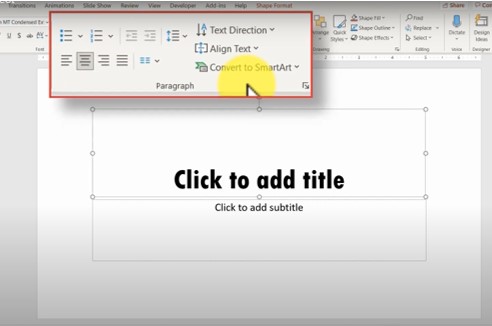 In this demonstration, I'll show you how to highlight the second one, which is the paragraph group.

You can of course repeat the same steps to highlight any portion of your screen.

Now we have the basic screen capture.

Now somewhere over here the second groups explanation starts and how far it continues.

Let me keep dragging this.

You can see that my cursor is still explaining the second group.

Now just about this point, we have the explanation moving to the third group, so this is the portion where we explained the second group.

So we need this part of the screen to be zoomed in.

So step one is finished.

That is, we decided which part of the screen capture needs to be zoomed in.

Then I'm going to make a copy of this segment of the screen capture.

How do I do that?

Now I'm going to click and drag this so that it fits in snugly inside the capture area.

Now I can Double click on this so now you have a copy of the screen capture and this is the duplicate.

Now the next step is just to crop the area that we want highlighted, so I'm going to select this.

And then use this crop tool here.

Click on it and then crop the portion that I want highlighted.

So I want to highlight the second group so I have cropped it till here and then move the crop and this is the area.

Now this is the area that represents second group.

Now when I scrub the playhead, see what happens as they move the playhead from outside to this area.

You can't really see any difference because this cropped area is of the same size as the one.

Behind it, now we're going to make this portion this cropped piece zoom out so that the audiences attention is brought to that specific area.

So how would we do that?

We're going to use a simple custom animation now to go to animations.

Click on this option here called animations, and then go to the animation step.

We're going to use custom, so let us select custom and drag it onto the clip that we had duplicated and cropped. 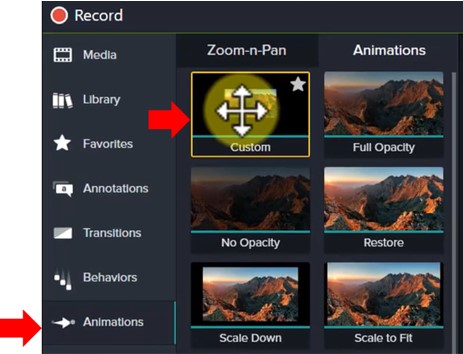 Now, at this point I want this portion to scale to 200%. You can see here my playhead is on that red circle here. Now let us go to scale and say 200%.

As soon as I did that, you can see that the portion that I had highlighted is not even there on the screen, and that is because it is moved off the screen.

Now you can see that this portion is outside, so I'm going to bring it onto the screen.

And then let us go to fit.

And now I'm going to place this enlarged portion right on top of the previous one.

Now let us do the scrubbing once again.

Let me take the playhead outside and as we come into the duplicate, you can see that this actually zooms out quite nicely.

Now it's easy for the viewers to see this, because this is much larger.

And the one behind it now to make this zoom out effect stand out a bit more.

We have the visual effects tab available here.

If you don't see it, you most likely will see it in more so when you click on more you will see visual effects, so select that option and you will go to visual effects tab.

Over this piece here and let me change the color of the border you can see by default the border color is white.

We want it to stand out, so I'm going to choose red color and let me increase the thickness to somewhere around 4:00 so I can clearly see.

The border, another thing I can do to make this stand out is to add drop shadow.

So let us go to drop Shadow and then apply it onto the same clip.

Now we can't really see the drop shadow so much because it is not offset enough.

So let me go to properties and then Scroll down and here I have drop shadow.

I'm going to increase the offset to a good extent, say around 60, so you can clearly see the shadow around here.

Now when I scrub you can see that as we move to this it expands and we have very clear demarcation of this expanded portion.

Now we need to have this go back to its original position.

So how do we do that?

Again, go back to the animations tab.

And you have this fabulous option called Restore.

So let us click and drag that particular effect onto this scene here.

Can you see here?

As soon as they place this, you can see that we have this effect, which is the scale effect is now brought back to its original position.

Let me play this here.

There is a zoom in and we have the border and the shadow and all the effect that we had done with the cursor is clearly visible.

And then it has gone back to its original size.

Now all we need to do is to add our captions.

So let me place this playhead right at the point where the first zoom in animation happens.

Now I'm going to have a caption right around here.

For that, let me go to annotations and I'm going to use this one because I want the background also to be shown.

So let me drag this and place it right next to the point where I had already placed my playhead.

Let me change the text.

Here I am going to call this paragraph group.

If you want, you can always change the font type.

You can choose something much thicker.

I usually use TW Cen MT Condensed Extrabold here it is if you want you can increase the size.

Yeah, that is substantial.

And if you want to have a red outline instead of the default green outline, you can go to this option here called as Annotation properties and then let us change the outline color to the red.

Color and you can move this over here.

Now we have the caption coming in and we want the caption to finish just at the time when this zoomed in portion goes back to its original size so that it is reduced.

The duration of This So that it coincides with the starting point of this wrist or animation.

Now when I take the playhead out and play, you will observe what happens.

You can see that we have the zoom in happening and we have the caption explanation is done.

The caption is out and we have the zoom going back so that is how you create this beautiful spot zoom effect in Camtasia.

You can create this effect even in the earlier versions of Camtasia.

Encourage us to create more such videos.

In the meantime, watch these other videos in our channel and encourages thanks a lot for watching this video.

I'll see you in the next one.

Get new tips & tutorials delivered right to your inbox